The first major new version of CryptoWP is now released, coming two months after launching on January 1st of the new year (read the whitepaper if you haven’t already). Here’s what’s new:

All active license holders can now update the CryptoWP plugin in one-click from the Plugins dashboard, or download the new version from the downloads area:

After enjoying two months of a fairly smooth plugin launch, multiple CryptoWP users reported some pretty serious issues to me about the plugin last week that needed to be addressed immediately.

The first was an issue with the autorefresh mechanism built into CryptoWP that pulled fresh coin data from CoinMarketCap onto their sites. Something had changed about how the coin data was handled, causing the autorefresh to run out of control and potentially run thousands of requests, oftentimes crashing a site.

This was obviously disastrous, and luckily the next issue that was reported help me get to the bottom of this issue:

Coin images were no longer being imported into people’s websites!

After a little digging I discovered that CoinMarketCap had changed how they handle coin images in their API, making them basically inaccessible to developers.

In tandem of the correct data not being sent to CryptoWP, and an admittedly over-complicated autorefresh process, I decided it was best to move data sources in hopes to simplify the plugin.

How CryptoWP Benefits From the CryptoCompare API

As of version 1.1, CryptoWP now pulls fresh coin data to your site from CryptoCompare. There are many benefits to using this new data source over CoinMarketCap, and I’m excited to continue building on top of this new wealth of data.

Apart from being a far more plentiful source of coin data, CryptoCompare currently has a huge edge over other APIs I looked at in a very crucial way:

Whereas many data source I researched require you to make many multiple calls to their APIs for each coin, CryptoCompare allows you to pull a customized list of coin data in one request (and maybe a couple more if you have hundreds of coins…).

Due to how brilliantly they handle their data, I was able to greatly simplify how CryptoWP processes that data onto your site and remove the many built-in crutches to “safely” handle the old API that required dozens of requests on each refresh.

Like I said, the move to this API unlocks the door to some exciting new features that just weren’t feasible before. Some ideas I already have:

So apart from fixing the performance issues and missing data, this new supercharged data source sitting under your site will allow for some exciting new developments in the near future.

One last thing that makes me excited about working with CryptoCompare into the future is how responsive and receptive their team is to implementing feedback. I as able to work with their founder through some of the issues I was having while migrating, and I greatly appreciate the time they invested into support.

The future certainly seems bright with CryptoWP’s new superpowers — have you updated yet, or did you want to hear more about what’s new? 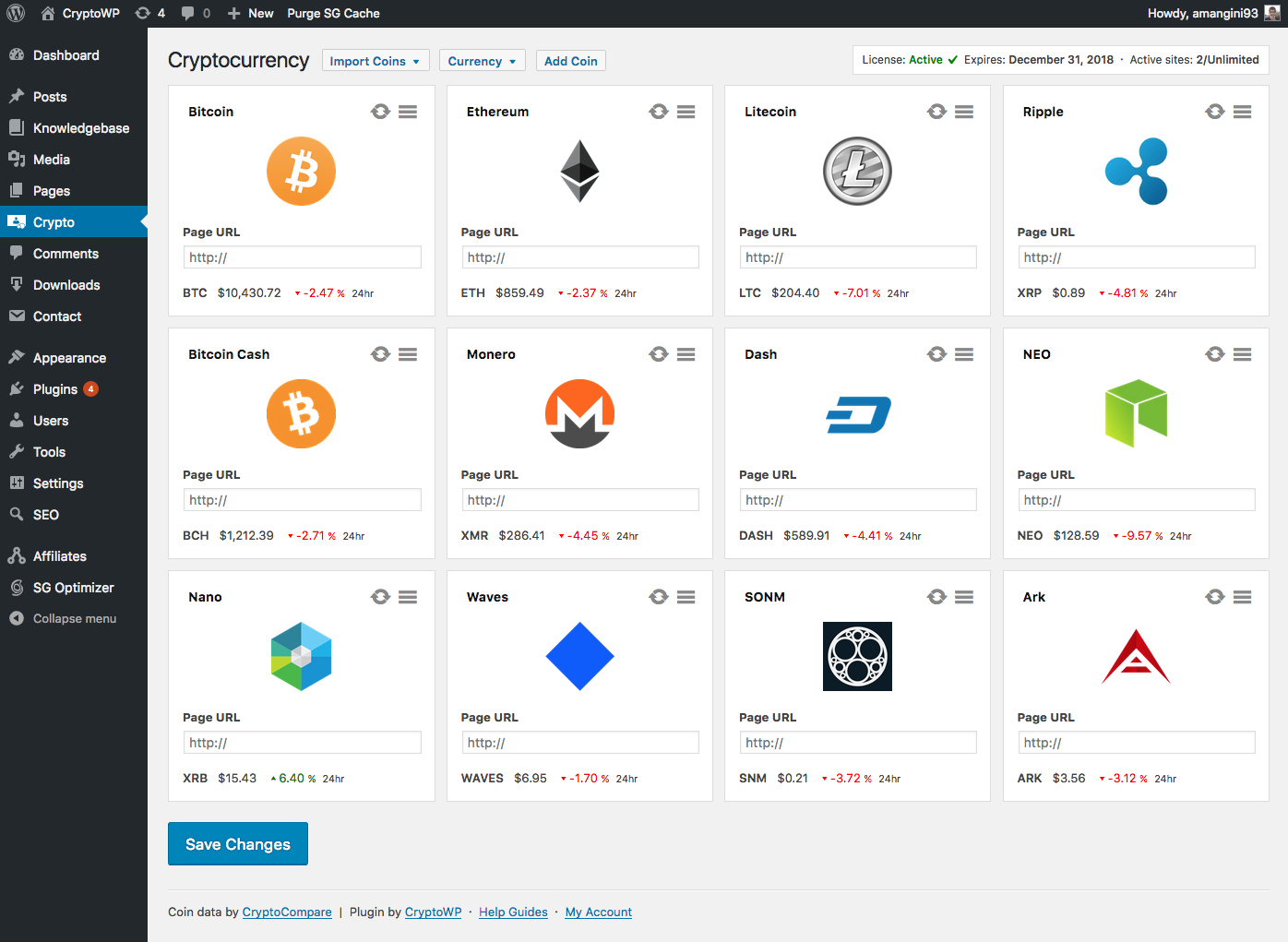 In order to get the best integration possible with CryptoCompare, I made a series of updates to the user interface of the Crypto Dashboard as well as a new recommended way of referencing coins with the shortcode.

First, instead of using the coin ID to import and refer to coins, CryptoWP will now recognize coin’s by their ticker symbol.

You’ll notice after you update that your Crypto dashboard is a little cleaner as the coin ID on each card has been removed. 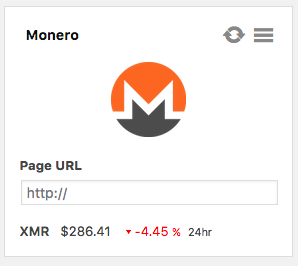 You’ll also notice the new Page URL input option. You can now link your Grids and List to any page on your site by entering the URL in this field. You won’t have to configure anything else after that!

The reason why I’m telling you this is because as of CryptoWP 1.1, the recommended way to call coins is no longer use the coin ID:

…but to now use the ticker symbols:

Now, I know many of you use the text shortcode across many dozens of pages and are probably wondering if this update will break all of your pages.

This was absolutely something I didn’t want to happen!

So any of your old shortcodes will still recognize the old format and continue to show your coins even if you don’t update to use tickers.

However, it’s important that you use the new ticker format for any new shortcodes you create as that will 100% ensure compatibility into the future.

If you can, gradually update your existing shortcodes to the new ticker format as this compatibility may not last forever. I will warn you in advance if that ever changes, though.

You’ll also notice a slight change in how the coin import process works. Before you could choose from a list of the top 100 coins and easily click to add coins to the Import queue.

As a temporary measure, you can now import coins by typing in their ticker symbol separated by a comma, as shown in the screenshot below: 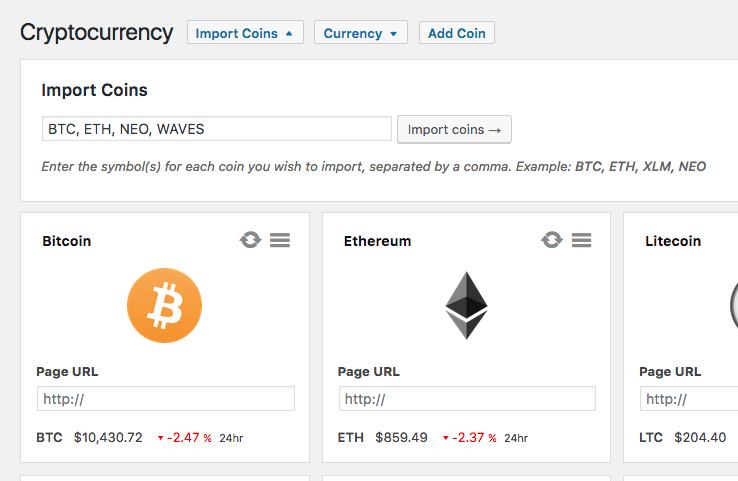 The reason for this slight step backwards is that the CryptoCompare API doesn’t yet offer a list of top 100 coins, so there is no easy way to get that data for use on your site without adding complication to the plugin.

I was assured after talking with the CryptoCompare team that this would be added soon, and once that is, the easy valet import system will return.

Until then, it’s still very easy to import new coins by simply typing the ticker symbol(s) into the import field like what’s shown above.

Import More Coins to Your Site in a Single Click

There is a bright side to the new import process however; thanks to the increased efficiency in CryptoCompare’s API, you can import many more coins in a single request!

Due to the inefficiencies of CoinMarketCap’s API, I was forced to limit the amount of coins you could import to five just to be safe.

Thanks to how efficient CryptoCompare is, and with a simple check from CryptoWP to make sure your site doesn’t send out too many requests at a time, you can now import dozens of coins in a single batch from the import field.

I know many of you will be happy about this as I have heard of sites with 100+ coins in the crypto dashboard.

This has been a huge update right? I thought I’d end this article by showing you a cool new design tweak added to the Grid cards in CryptoWP 1.1.

Just hover your mouse over the cards below to see:

Did you see the logos rotate? Now whenever you hover your mouse over any Grid card, your users will get a cool hover effect on the coin logo!

I understand how tiny this sounds, but interactions in your design can really make a user feel more welcome to your site.

In addition to the new hover effect, I have also strengthened some of the CryptoWP CSS selectors to help make the design match any theme out of the box.

Finally, a series of warning and error messages that would occasionally appear after saving your options have been cleared up.

If you see any error/warning messages upon installation or after updating to CryptoWP 1.1, let me know so I can fix them!

All active license holders can now update the CryptoWP plugin in one-click from the Plugins dashboard, or download the new version from the downloads area:

CryptoWP is maintained as a free plugin. If you are interested in new features or want to support the plugin author, consider pre-ordering CryptoWP Pro*.

BONUS: Get 3 extra months of updates when you pay with crypto.

The Next New Version of CryptoWP is Almost Here…

Many new features, tutorials, and other enhancements are being worked on for the next plugin release. Stay on the newsletter to hear what's new with the plugin: *